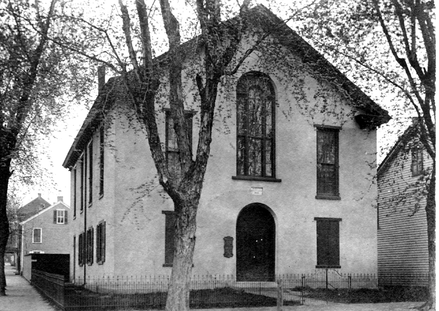 ​First Baptist Church had its origins in a funeral service in 1857. When Catherine Pennypacker died, her family wished to have their former Baptist pastor from Lower Providence Baptist Church perform her funeral. Town folk and friends alike were taken with this gentleman’s sermon so much so he was asked to return several times to Pottstown in 1858 to conduct other religious services and prayer meetings in a local town hall. These meetings were so successful that in February, after cutting the ice on the Schuylkill River, three men & 19 women were baptized in the river with reportedly thousands looking on. In March, 23 more were baptized and in May, seven more people followed in the waters of baptism.
On May 26, 1858 First Baptist Church (FBC) was formed as 65 people transferred their membership to this new church. Soon a small church, having two floors and measuring forty four feet by sixty feet, was built on the site of the present stone church. The first floor had four Sunday school rooms with living quarters for the sexton in the rear of the basement, while the second floor was used for Sunday worship.

In the first decade of the 1900s this magnificent stone edifice was erected. Probably its most outstanding features are its beautiful, beyond description, stained glass windows depicting the birth, baptism and the resurrection of Christ.In the later 1950s a new educational wing was added to the church complex. 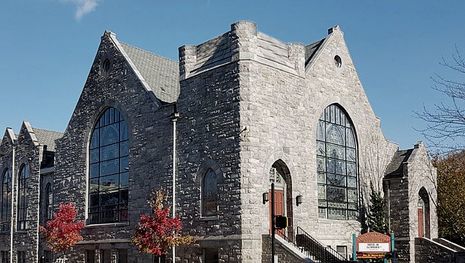 In spring of 2017, the structure of the tower was not only disintegrating but falling down, and had to be removed. The cost was exorbitant but repair for safety was crucial.

With the generous help of so many from the community, the tower was removed. We will forever be deeply humbled and appreciative for their support.

FBC is more than the building, more than the tower.
​Pastors have come and gone  - one younger moving to larger churches and some have gone from serving the church to retirement. One of the ways that we minister to Pottstown is by sharing our building with community groups. Centro Cultural Latinos Unidos (CCLU) meets here on a regular basis as does Narcotics Anonymous. No one is turned from its door despite their color, past religious affiliations, sexual orientation - all are meant to feel welcome- REALLY!